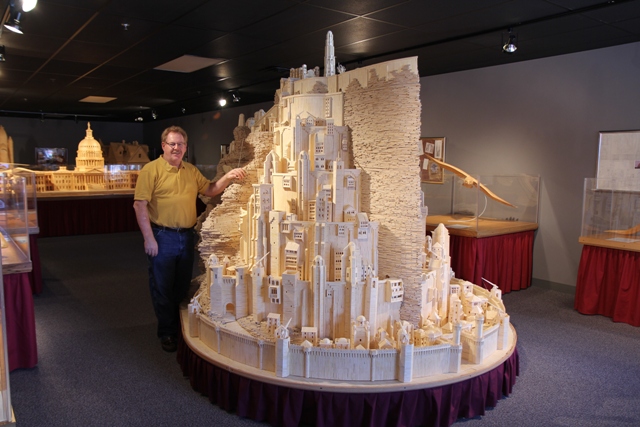 Matchstick Marvels has taken another fantastic journey when Patrick Acton completed his matchstick model of J.R.R. Tolkien’s City of Kings from the Lord of the Rings trilogy! Come along for a trip to Middle Earth and its Great White City, Minas Tirith.

Acton’s version of Minas Tirith is one of his biggest and most detailed matchstick models yet, as he has constructed his rendition of the tremendously ancient city that Tolkien says “appears hewn from the rock of Mount Mindolluin” in the White Mountains. Tolkien’s fortress city is said to tower 700 feet above the Pelennor Fields in Middle Earth’s land of Gondor. Acton’s matchstick version of the seven-level city was started in 2007 and took nearly three years when completed in February 2010. The Minas Tirith model contains hundreds of city buildings and is topped with the Citadel, the Tree of Gondor, and the White Tower of Ecthelion.

The  took 420,000 matchsticks to construct, and an additional 24,000 small wooden blocks that were used to construct Mount Mindolluin, which supports the huge matchstick structure.  Minas Tirith includes gates, ramps, tunnels, and passageways as they ascend the seven levels comprising the city fortress. The model is currently on display at the Ripley’s Believe It or not in Hollywood.