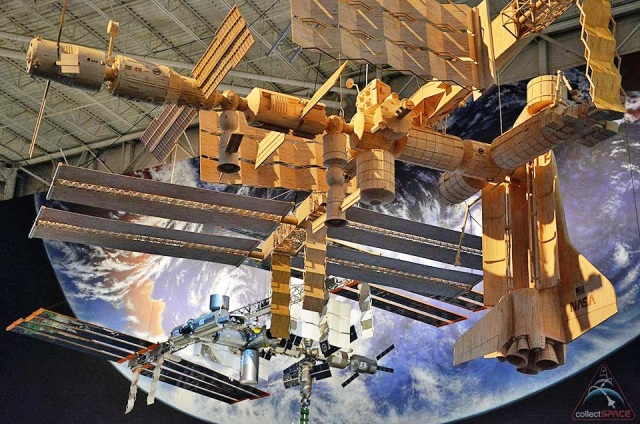 These 1/14 true-scaled cutaway models represent the Russian Zvezda module and the European Space Agency’s (ESA) Jules Verne Automated Transport Vehicle (ATV) module, which make up a small portion of the International Space Station (ISS).  The cutaway modules have been constructed for Ripley’s Believe It or Not as part of a matchstick exhibit that will feature the 1/28 scaled matchstick model ISS seen hanging here.  The Zvezda was the third module launched as construction of the real ISS began back in 1998.  The ATVs came much later and play an essential role carrying supplies to and from the ISS since the retirement of the United States space shuttles.

The Russian Zvezda module is the first (far left) of two models seen here.  The Zvezda took about 33,000 matchsticks to complete.  The module originally provided all life support systems for the space station as well as reboost capabilities to change the orbit of the ISS.  It still serves as the Russian living quarters.  The cutaway section shows the command center as well as the “manual docking controls” that are used if the automated system were to fail during vehicle docking maneuvers.  Also shown in the cutaway are dozens of storage compartments, Earth observation windows, work/dining table, bathroom, airlock hatches, and fuel, oxygen and water tanks section.

The matchstick version of the Jules Verne took about 22,000 matchsticks to complete.  The Jules Verne is the second of two International Space Station cutaway modules being constructed for Ripley’s Believe it or Not. The Jules Verne ATV is one of ESA’s five different ATV units used to ferry supplies to the ISS and remove waste from the space station.  The ATVs carry water, gas, propulsion fuel, oxygen and solid materials to the station.  They are then loaded with waste and unwanted materials from the ISS before returning to earth during a controlled burn where they disintegrate in the upper atmosphere.

The cutaway model shows the ATVs storage compartments and tanks used to carry water, fuels and oxygen to the ISS.

The cutaway models will be displayed with the matchstick version of the ISS when shipped to  Ripley’s Believe It or Not this July.  Ripley’s officials will be able to display the two modules together or separately.  Here the Zvezda and the Jules Verne modules are shown together as they sometimes appear when an ATV is docked at the ISS.  The ATVs have the option of docking at different ports on the ISS.

The ISS model took an additional 221,000 matchsticks to complete, and resembles the current configuration of the space station.  Unlike the other matchstick models that are constructed exclusively of matchsticks, the ISS had to be constructed over an aluminum framework to overcome the effects of gravity, something that presents no challenge to the real space station.